She grew up in Elba, buys her cowboy boots in New York and rocks around the world – meet Grace Solero, the rock singer/songwriter, who has made London her home! Her arrival in rock is a tad unconventional though: she trained as a gymnast first and past dance training, theatre acting, singing jazz and dabbling in opera, found her visceral voice in rock! Once in London, she felt she wanted to forma her own band, and upon responding to an advert by Dan, the guitarist she plays with on Primrose Hill, the two hit it off and have played together ever since.

To catch Grace during her spur of the moment performance on Primrose Hill was emotional: people were distancing, yet desperate for some great live music under the open skies, as the year 2020 will forever be known as the year ‘without a summer’. No festivals meant no release valve that comes with dancing and summer vibes, clubs weren’t open either, and although a few venues started live-gigging inside, it all took place at the cost of zero atmosphere. Everybody seemed to be trying hard to do something, hence it was a genius idea for Grace & Dan to just grab their guitars and play for whoever was there. It felt liberating and undeniable, as music just had to happen to transform our lives for that hour, on that Sunday on top of Primrose Hill.

Her fate was sealed, when a mate of hers saw her playing live in Rome, and subsequently said that she’s wasting her time there: ‘you need to go to London’, she said! Her past is what makes Grace who she is today: you can definitely sense body consciousness and physical strength (she trained as a gymnast and in dance), she lives every song through her voice (theatre acting), and has a wicked range, that others can only dream of – she actually started singing in jazz, and those lessons from an opera singer deffo paid off.
In meeting the guitarist Dan Beaulaurier, Grace has found a musical soulmate, and once they got together after Dan placed an ad in a London club, they got on straight away – the rest is history. She just loves playing live, creating emotions and letting it rip to wake up the world – it’s no understatement to say that Grace is a (gentle) force of nature.

Chatting to her in person for our exclusive interview here on TA-DAH.TV, she showed us just how a complex, yet utterly free and travelled a character she really is: she loves buying her cowboy boots in New York, is into designers such as Alexander McQueen, Thierry Mugler and Bluemarine, is into Sunday roasts and steak and ale pies (clearly, Dutch pancakes go down well too) and hangs out at Southbank and Camden Market (check out iconic pubs and places like The Dublin Castle and Made In Brazil).
However, underneath all this, she is completely real and appreciative of what surrounds her and the world she’s in, enabling her to live her dream and just be herself. Yet the first lesson for her to be learned in the music biz was: ‘don’t get excited about all the promises…actions speak louder (than words)’. Years later, she’ll give this advice to any budding artist, who is dreaming of a singer/songwriting career in music: ‘Keep being yourself, have artistic integrity and write the music you believe in – you can’t please everyone’ – Grace Solero has clearly found her groove in an industry that is as hard as nails!

Grace’s style is hard to pinpoint: her ballads are sensuous, her voice can cross over into folk, but also grunge and a bit of pop-rock on the edges. Critics have likened Grace’s voice to that of Dolores O’Riordan (Cranberries), Alanis Morissette, PJ Harvey and Skin (fronting the band Skunk Anansie). She possesses this enormous range and adaptability, which is why she manages to bring vocals with such emotional intensity. Her frequent comparisons to the female version of the rising rock star that was Jeff Buckley are not at all surprising, as she can ‘bring it’ full tilt or strip it down – always managing to stay true to her own personal style. No wonder then, that London’s city mag Time Out (also available for cities all over Europe, like Lisbon and Paris, etc) described her voice as ‘Bitter sweet, Buckley-esque’ and Slade’s Noddy Holder felt she has a ‘Raw, dreamy, mercurial voice’.

Collaborations and appearances throughout her career have resulted in her working with the American vocalist Allan Merrill on his show Across The Pond for NY TV channel Jam Music Network (he’s the guy, who wrote Joan Jett’s meg-hit ‘I Love Rock’n Roll, universally known as one of the biggest rock classics for a female vocal)#RIPAllanMerrill.

Stateside, they played The Bitter End in NYC, The Tusk in Philadelphia, down in Nashville they performed at Douglas Corner and when Hollywood beckoned, they played The Piano Bar! Over in Europe, Berlin saw them perform at White Trash, in Hamburg they played the Monkeys Music Club, over in Amsterdam they hit the stage at CCMuzikcafé, in Oslo they performed at Buckley’s, further South in France, they entertained the crowd at Le Pub Forum in Sedan and Le Kilberry in Reims, whilst in Milan they wowed their fans at TNT Club Rome, Radio Londra, Redrum and Ombre Rosso. Back in the UK, they played Bannerman’s Rock & Whisky Bar in Edinburgh, The O2 Institute in Birmingham and back in good old London Town, they feel quite at home at the Union Chapel, Cargo, Water Rats and Camden’s The Dublin Castle.

Grace has also performed alongside Knox, one of the British punk band The Vibrators founder members, as well as Noddy Holder of Slade. Furthermore, Grace and Dan also have an interesting side project going with the pedal steel playing legend that is BJ Cole (who played with Elton John, Björk, R.E.M and Cat Stevens). Looking at the wide variety amongst the musicians she’s worked with, it goes without saying, to describe her voice as ‘just’ versatile is somewhat of an understatement…

Touring is back on the agenda for Grace Solero & band, since they’ve got a new album coming out in 2021 called ‘Metamorphosis’! Grace describes it as a ‘spiritual journey towards healing and the power of love’, so you can expect lots of emotion and personal experience to hit you over 9 tracks. ‘Awake’, the first single has already dropped and is out now, as we’re going into programme release.

In every #fashiondesigner lives an #interior #desi

The new #ps5 #launched #worldwide this #week and 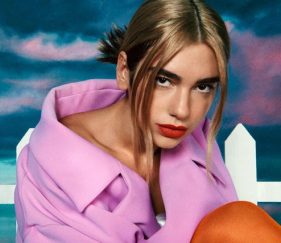