London’s Southbank is a huge hub for art & the performing arts, and the Tate Modern is the jewel in the crown. We love walking along the Thames, checking out book stalls, going for endless coffees and ending up at the Tate Modern’s iconic building, with the infamous ‘wobbly bridge’ right in front of it. Make a point of visiting to take in the sights when you’re in town next as Londoners just love this space. 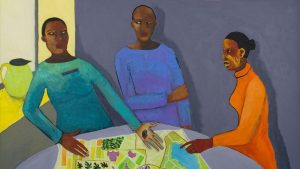 Housed in London’s former Bankside Power Station, resides London’s famous Tate Modern. Part of the Tate network of galleries in England, it is not only one of the largest museums of modern and contemporary art in the world, but also one of the most visited art museums in the world. The Tate Modern’s large lay-out allows for the creation of vast exhibition spaces, displaying contemporary pieces dating from 1900 to the modern day.

This space also provides the room for temporary exhibitions, such as the current favourite and one on many bucket lists – Yayoi Kusama’s Infinity Mirror Rooms. TA-DAH.TV reports, that this showcase will run until 27 March 2022, so plenty of time for you to transport yourself into Kusama’s unique vision of endless reflections. We recommend you booking your tickets soon, as this popular exhibition quickly sells out.

The Turbine Hall, originally used to house the generators of the old power station, provides a grand space for specially commissioned works by contemporary artists. Works are displayed between October and March each year. Notably Ai Weiwei’s ground-breaking Sunflower Seeds filled the space of The Turbine Hall in 2010, which saw life-sized sunflower seed husks, intricately hand-crafted in porcelain, poured into the space.

Other works like The Weather Project and EMBANKMENT have also been displayed here. During the period of the year when The Turbine Hall is not exhibiting large pieces, smaller occasional events and exhibitions are held here, such as Damien Hirst’s For The Love of God.

Across other areas of the vast building, temporary exhibitions take over spaces for several months, drawing in crowds of art lovers and tourists.

Some of the current exhibitions at the Tate Modern include:

Tate Britain is the oldest within the galleries of the Tate network, found on Millbank in the City of Westminster. Opened in 1897 this gallery houses a substantial collection of works from the Tudor-period. With a range of pieces from J.M.W. Turner, it is traditionally named the National Gallery of British Art, and was quickly nicknamed the Tate Gallery after its founder Sir Henry Tate. In 1932 the gallery adopted this name, to be known as it is today.

Based on Liverpool’s waterfront within the Albert Dock, this branch of the Tate gallery was first opened in an event hosted by Prince Charles in 1988. The Liverpudlian space houses pieces from the Tate Collection which overtime has grown to feature a wide range of British art dated from 1500 to modern day.

Like other venues of the Tate network, Tate Liverpool also hosts many temporary exhibitions and until 2003 this gallery was the largest of modern art in the UK to be found outside of London.

Current exhibitions at the Tate Liverpool:

Amongst one of the most visited attractions in the UK, The Tate St. Ives in beaurtiful Cornwall is the youngest addition to the organisation. Built between 1988 and 1993 it is located on the site of an old gasworks looking over Porthmeor Beach. Since its major refurbishment in 2015, which saw the gallery close until 2017, the Tate St. Ives has hosted a number of stunning art exhibitions including:

One famous exhibition was held there in 1999, with the aim of celebrating the solar eclipse. Hosting an exhibition called As Dark as Light, with work from collaborating artists and local school children, it was a great success! St. Ives is always worth a visit with its ‘mediterranean weather’ and a stroll around the Tate there makes it even sweeter.

Cezanne wows the world with a once-in-a-generation exhibition at Tate Modern, London